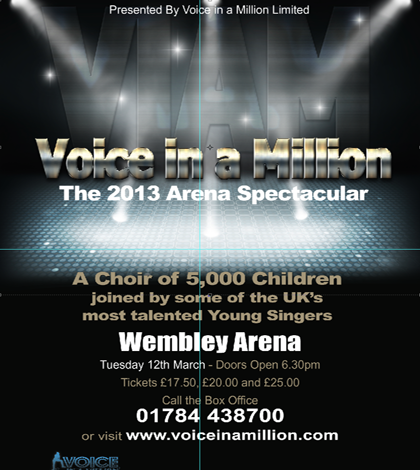 The highly successful children’s choir ‘Voice in a Million’ is set to perform their ‘Arena Spectacle’ on the 12th March at the world famous Wembley Arena, in a touching tribute of thanks to Mums everywhere.

The ‘Mothers Day Arena Spectacle’ will see around 5,000 members of the UK children’s choir take to the stage at one of the worlds best known music venues, to perform a wide ranging repertoire of engaging numbers including the Gary Barlow’s Jubilee Hit ‘Sing’, the Olympic theme ‘One Night Like This’ and the heart-string-tugging ‘I want a Mum’ which is an original Cyndi Lauper piece rearranged specifically for the choir in celebration and recognition of the hard work, love and dedication of Mums everywhere.

The ‘Voice in a Million’ choir has gained national esteem and found a place in the hearts of many since the musical project was founded in 2009. The concept behind the choir was one of passion and tenderness for the plight of children across the world who are unfortunate to have to live without the care of their parents. ‘Voice in a Million’ was created to be a platform upon which to raise awareness of those children separated, abandoned or orphaned and in desperate need of a loving family life.

Having started in 2009 with around only 30 members, the children’s choir has exploded in reputation and following, with over 20,000 members performing as part of the ‘Voice in a Million’ choir nationally. The choir has enjoyed success at sold out arenas, through the release of an album and have also appeared with a range of global music superstars.

‘Voice in a Million’ are looking to maximise public awareness this Mothers Day for the millions of children in need of a family. If you’d like to hear more about the ‘Voice in a Million’ project, enquire about any aspect of this release or to arrange an appearance on either radio or television, the choir would be delighted to hear from you. To get in touch please contact Robert Garofalo on 01784438700, at Robert.garofalo@voiceinamillion.com or by visiting the official website at www.voiceinamillion.com